How have businesses been affected by nepotism? 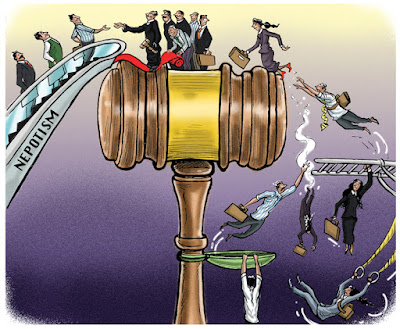 Introduction
Nepotism means favoritism and being unprofessional. According to nepotism and favoritism is very common behavior in business organizations. Usually nepotism is flourishing in the family-managed businesses. These businesses nepotism is adopted to prevent loss of power belonging to the family in the business. This is the main obstacle to the professional behavior, democracy and institutionalization. In the year 1994 an article by Hagen and Amin argues that nepotism is also a dominant issue in less-developed countries.
Nepotism is a corruption practice followed mostly in the recruitment process. When the managers or higher authority with decision power is intended to favor connected people in order to obtain their personal benefits, even though these people have low ability or qualification than other better applicants.
In the analysis done by these favoritism bring inequality among the employees and they feel that working under incompetent person is distressing situation. Due to these circumstances lack of confidences causes negative effect on employee job satisfaction, organizational commitment and individual performance. According to this research article the effects of nepotism and favoritism in the Turkish state banks.

Effects of nepotism on organization
- Reduced productivity will be a negative effect, as employees will not give their best which will lead to lower in performance, unsatisfactory results and a lowered output.

- For an organization a dissatisfied employee and unethical leader is the worst combination because these will affect the overall outcome result of the organization.

- When family and close friends work in the same company their personal conflicts and differences can easily turn into problems in the work place.

Data Collection Methodology and Data Analysis
In the research by the data was analyzed using a statistical software package known as LISREL 8.54. Cross-sectional data were obtained via a previously developed research model and scale, and were analyzed by quantitative methods. For the reputation of the state bank the names of the executives were confidential and was not to be disclosed. The researcher found it very costly and time consuming to contact all the state bank branches in Ankara. Therefore a sample of 300 respondents from relevant state banks was developed taking into account the location, accessibility and financial factors and the questionnaire forms prepared were sent to the employees. Among these 250 questionnaires were returned and 7 questionnaires from that were not completely filled out. So a total of 243 questionnaires were used to collect data.

The demographic characteristics were analyzed based on the respondent’s gender, their marital status, their age, educational level, the banks they used and their level of experience. According to the table 1 above majority of the respondents were female (61.73%). The breakdown of the banks they used are close to one another.  And a 65.02% of them were married and the same percent of them were with a bachelor’s degree. Nearly all the respondents were with a sector of experience.


Notes: Each item is measured on a five-point Likert scale. All correlations are significant at 0.001 level.

Table 3: Means, Standard Deviations and Correlations Related to All Variables Used in the Model

In the questionnaire, 5-point Likert scale from 1=strongly disagree, 2=disagree, 3=neutral, 4=agree to 5=strongly agree was employed. More than half of the survey was conducted via face-to face interviews. The remaining were given to respondents to be filled out at home and were collected the next day.
According to the table from the research article, the highest correlation was found between human resource practices and job satisfaction (0.69). Thus the lowest correlation was between human resources practices and turnover intention (0.31). The mean and standard deviations of these factors were calculated to support their validity and the results shows that it supports the validity of the scale.

Conclusion
The study examined the effects of nepotism and favoritism in the state banks on human resources practices, job satisfaction, organizational commitment and intention to quit. It also revealed the importance of independent executives in the banking sector. They should keep their managerial decisions transparent and clear to the employees without nepotism or favoritism included. This will be the main reason for employee job satisfaction and thus will improve their commitment and efficiency. `

Büte, M. (2011). The Effects of Nepotism and Favoritism on Employee Behaviors and Human Resources Practices: A Research on Turkish Public Banks. TODAĐE’s Review of Public Administration, 185-208.