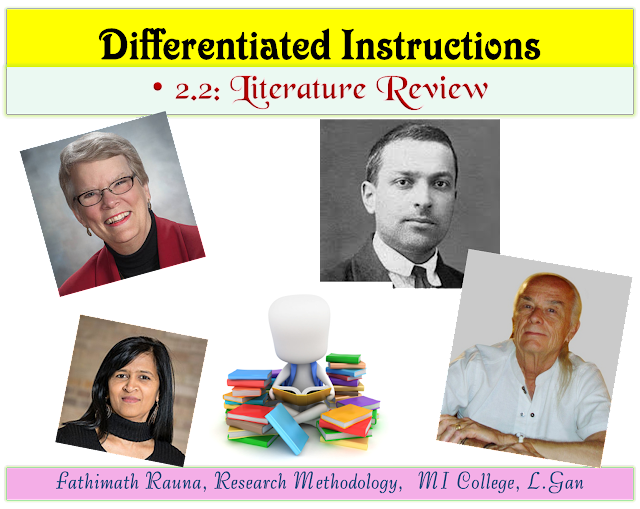 
According to Levy (2008) teachers and professors emerged to promote principles of differentiated instruction when teaching became increasingly challenged for a diverse group of students. When Vygotsky (1975) was working on his theory of learning (ZPD), he found that learning affects differentiated instruction. He described ZPD as:
“ the distance between the actual developmental level as determined by individual problem solving and level of potential development as determined through  individual problem solving under adult guidance or in collaboration with more capable peers”.
According to Woolfolk (2013), the ZPD plays an important role in differentiated instruction, because it allows teachers to recognize an entry point for each student’s learning needs. Therefore, this helps to develop that student’s learning potential.


As mentioned before, Tomlinson is one of the leading experts on differentiated instruction. Tomlinson (2004) argued that all the students are different from each other, therefore, they should be taught in such a way where learning differences could be addressed.  For these learning differences, she mentioned that the content, process, and product of a lesson can be differentiated. Furthermore, she added, differentiating the content, process and product work-out with each other to support one another and is cycled through as every single student grows and develops in their own learning capacity.