In simple terms, a variable represents a measurable attribute that changes or varies across the experiment whether comparing results between multiple groups, multiple people or even when using a single person in an experiment conducted over time. In all, there are six common variable types.

Five variables that might be investigated by educational researchers. 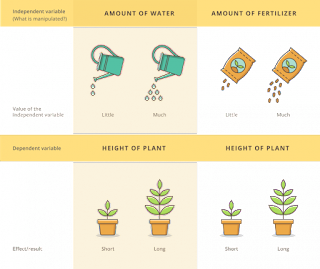 Sometimes certain characteristics of the objects under scrutiny are deliberately left unchanged. These are known as constant or controlled variables. In the ice cube experiment, one constant or controllable variable could be the size and shape of the cube. By keeping the ice cubes' sizes and shapes the same, it's easier to measure the differences between the cubes as they melt after shifting their positions, as they all started out as the same size.