If people inhabit Mars, what means of communication between two planets might be fast enough to share useful information? 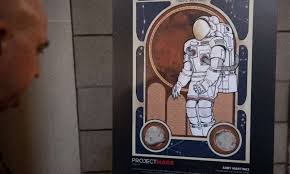 The next round involves more filmed interviews and group challenges to see how well people work together. The final selection round will follow the candidates as they cope with living in harsh, remote mocked-up Mars habitats. At the end of the process, Mars One wants six groups of four astronauts to train for the mission. The Dutch not-for-profit organisation is raising money any way it can. That means broadcasting rights, sponsorship deals, crowd-funding, donations from philanthropists, and licensing intellectual property rights from inventions made along the way. The first mission, costing $6bn (£4bn), aims to send a spacecraft carrying two men and two women to the planet. Mars One will contract a rocket manufacturer to build them a rocket. That could be Lockheed Martin, SpaceX, or another company. In 2024, they will blast the crew’s landing module and their main living quarters for the voyage into Earth’s orbit and dock them together. The crew then launch into Earth orbit themselves, climb into the waiting Mars spacecraft, and head off for their destination.