The best way to travel across universe and galaxies 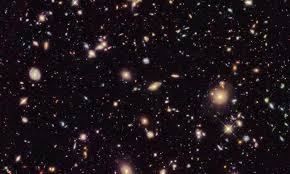 If you peer out into the depths of space -- at the vast expanse of stars, galaxies, and even the leftover glow from the Big Bang itself -- you might think that if humanity can understand the laws of nature and create a good enough technology, there are no limits to what we can explore. If we were to develop nuclear fusion technology, antimatter storage capabilities, or even the ability to harness dark matter as we traveled, we could unlock the potential for interplanetary, interstellar or even intergalactic travel. By accelerating ourselves over months or even years to reach near-light speeds, we could even reach our target destination within a single human lifetime.
Yet even if we imagine a future where we can do exactly that, there are still parts of the Universe that will be forever inaccessible to us. If the Universe were static, constant and forever unchanging, then all it would take was time to reach even the most distant object we could fathom. But our Universe isn't any of those things; it's expanding, cooling, and gravitating from an initially hot, dense state known as the Big Bang. That glow was once so hot, it ionized atoms, split nuclei apart and even spontaneously created matter and antimatter.