Sexual harassment in the workplace.

Workplace sexual harassment takes many different forms. It can come from a coworker, a supervisor, or a customer or client, and ranges from unwanted touching, inappropriate comments or jokes, or someone promising you a promotion in exchange for sexual favors.
Sexual harassment refers to the action of repeated, annoying sexual comments, gazes and physical contact at the workplace. Sexual harassment refers to sexual actions that annoy the party affected. Workplace relationships refer to a close relationship involving romantic or sexual feelings between colleagues. Both males and females can sexually harass another individual of the same gender or different gender. As statistics show, most women face sexual harassment by men.
Sexual harassment does not have to be “sexual.” It can also look like teasing, intimidating or offensive comments based on stereotypes (e.g., about how certain people “are” or should act), or bullying someone or a group of people based on their sex, gender identity (man, woman, trans, intersex, non-binary) or sexual orientation. Sometimes sexual harassment is about sex and something else, like race or ethnicity. For example, a woman of color may experience harassment in the workplace differently from a white female co-worker she may be the target of abusive or hostile behavior because of the combination of her sex and her race or ethnicity.


Examples of behavior that could be harassment include but are not limited to: 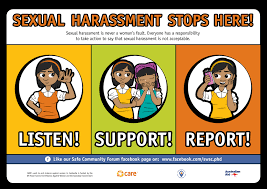 What are my rights?
Work in a safe, discrimination-free environment
Be told about your company’s sexual harassment policies
Talk about or speak out against sexual harassment
Report the harassment to HR or your manager
Picket or protest
Have your complaint taken seriously and investigated
Ask your employer what will happen and who will know if you file a complaint 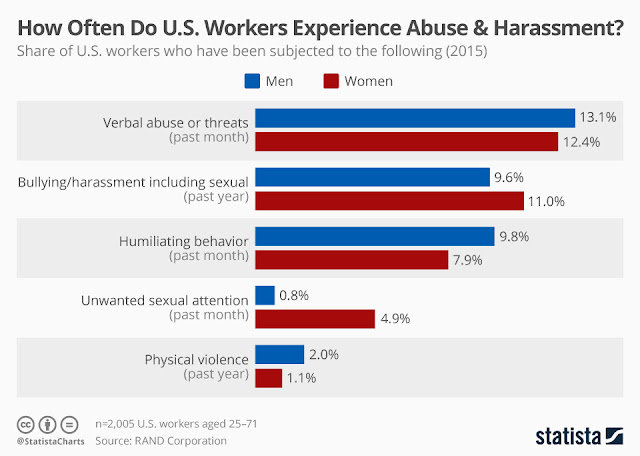 A new report from the RAND Corporation has examined the physical and emotional impact of the modern U.S. workplace. It found that while some workers have to deal with physical exertion, many jobs also have a serious emotional impact on employees.
Bullying, violence and harassment are all serious problems in American working environments, though thankfully, only a minority of workers have had the misfortune to experience them. Over the past month, 13 percent of men and 12 percent of women had to put up with verbal abuse at work. Over the last 12 months, 9.6 percent of men and 11 percent of women experienced bullying or harassment. Perhaps unsurprisingly, women are far more likely to endure unwanted sexual attention than men. According to RAND, just under 5 percent of U.S. woman experienced some form of unwanted sexual attention in the workplace over the past month.

Despite the achievements in addressing gender inequalities in the Maldives, situations related to women’s rights have worsened in the past 10 years affecting reproductive health and rights, empowerment and access to the labor market. This is valid in some of the most remote atoll-islands but also in bigger cities like Male’ where women and girls experience disadvantages every day.
Gender based violence, including sexual harassment, is a major problem in Maldives. Recent surveys indicate that 96% of women have faced street harassment at some point in their lives, with 60% first facing harassment before the age of 14 and 40% before they turn 10. Furthermore, 89% of the victims have never reported it to the police.

Below are the some statistical survey information carried by a Maldivian researcher about the “SEXUAL HARASSMENT IN GOVERNMENT OFFICES A KNOWLEDGE, ATTITUDE AND PRACTICES SURVEY OF STAFF WORKING IN MALE”. 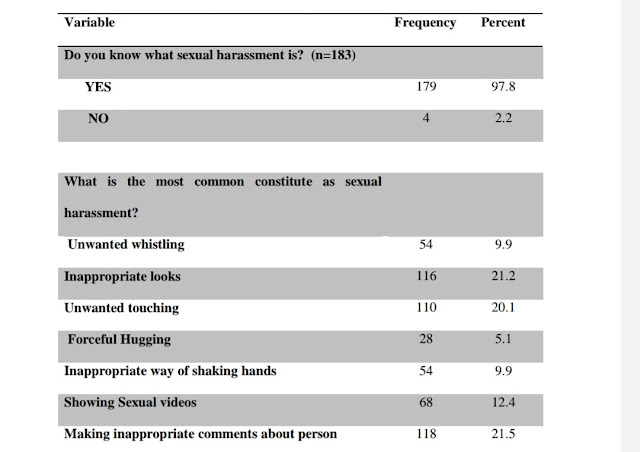 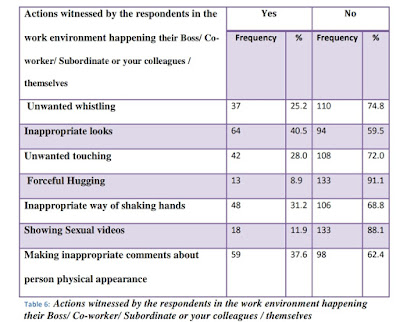