Distinguish between a sample and a population.

Distinguish between a sample and a population 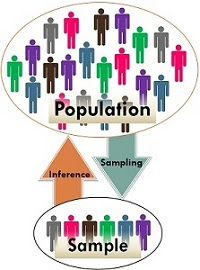 In simple terms, population means the aggregate of all elements under study having one or more common characteristic, for example, all people living in India constitutes the population. The population is not confined to people only, but it may also include animals, events, objects, buildings, etc. It can be of any size, and the number of elements or members in a population is known as population size, i.e. if there are hundred million people in India, then the population size (N) is 100 million.

By the term sample, we mean a part of population chosen at random for participation in the study. The sample so selected should be such that it represent the population in all its characteristics, and it should be free from bias, so as to produce miniature cross-section, as the sample observations are used to make generalisations about the population.

Key Differences Between Population and Sample

The difference between population and sample can be drawn clearly on the following grounds:
Share this article :