Will humans inhabit Mars instead of saving Earth from the ecological catasrophe?

Will humans inhibit Mars instead of saving Earth from the ecological catastrophe?

Recently, SpaceX held a top-secret “Mars Workshop” in Boulder, Colorado, to discuss what it would take to colonize Mars. Although the deliberations of the workshop were kept quiet, in the past SpaceX founder Elon Musk and other prominent figures, including renowned physicist Stephen Hawking, have stressed the importance of establishing a sustainable outpost of human civilization on the Red Planet. “If there’s a third world war we want to make sure there’s enough of a seed of human civilization somewhere else to bring it back and shorten the length of the dark ages,” according to Musk. Hawking believes that “[w]ith climate change, overdue asteroid strikes, epidemics and population growth, our own planet is increasingly precarious,” and that we must colonize a new planet in the next 100 years. “The Call of Mars” by Astronaut Buzz Aldrin advocates for a “comprehensive plan that would lead to permanent human settlement on Mars in the next 25 years.” Tim Urban, the writer behind the long-form blog Wait But Why, sums up the situation with the following metaphor: “[a]ll of our eggs are on one planet, let’s get life insurance for the species.”
The mission to colonize Mars runs into three major challenges. First, likening a colony on Mars to life insurance is misleading. If the earth does overheat to the point that we all fry or becomes so polluted that we all choke, there will be no way to move the world’s population to Mars. Not even one child per family. Rather, the idea is that the survival of the human species will be ensured; the select few that go to Mars will survive, procreate, and gradually build a new population. Elon Musk’s most optimistic estimate is that SpaceX will transport one million people to Mars in the next 100 years. The proper analogy is to the United States' Cold War plan for nuclear warfare—to rush a few thousand "special" people to bunkers, leaving most of humanity to be nuked. 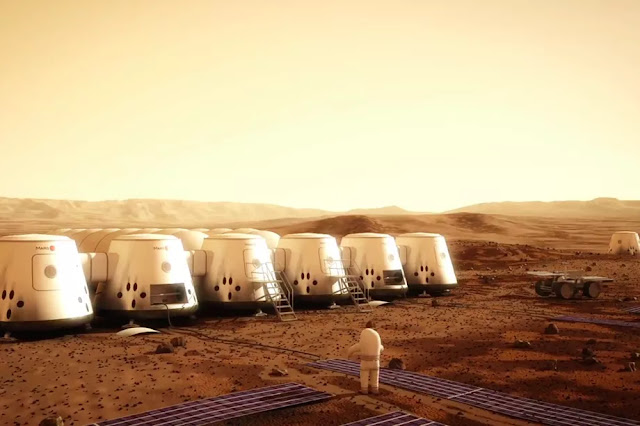