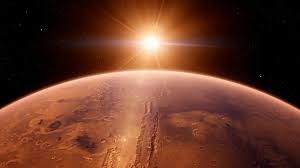 Mars is a planet. It is the fourth planet from the sun.  Mars is known as the Red Planet. It gets its red color from the iron in its soil. Mars has two small moons.

Permanent settlement allows Mars One to use technology that is not substantially different from existing systems. The hardware specifically needed for this mission still needs to be designed, built, and tested extensively but the technology already exists. Mars One is not an aerospace company will not design or manufacture mission hardware. All equipment will be developed by third party suppliers and integrated in their established facilities.

Why we need to live on Mars?

The reduced gravity well of Mars and its position in the Solar System may facilitate Mars–Earth trade and may provide an economic rationale for continued settlement of the planet. Given its size and resources, this might eventually be a place to grow food and produce equipment to mine the asteroid belt.


Related Similarity to Earth:
Earth is similar to Venus in bulk composition, size and surface gravity, but Mars' similarities to Earth are more compelling when considering colonization. These include:

There are some extremophile organisms that survive in hostile conditions on Earth, including simulations that approximate Mars, plants and animals generally cannot survive the ambient conditions present on the surface of Mars.

Surface gravity of Mars is 38% that of Earth. Although microgravity is known to cause health problems such as muscle loss and bone demineralization, it is not known if Martian gravity would have a similar effect. The Mars Gravity Biosatellite was a proposed project designed to learn more about what effect Mars' lower surface gravity would have on humans, but it was cancelled due to a lack of funding.