Should there be any regulation of cyberbullying? 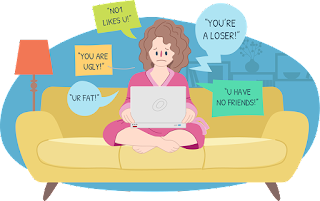 What is cyberbullying?
According to Smith et al.as an, cyberbullying is an aggressive, intentional act carried out by a group or individual, using electronic forms of contact, repeatedly and over time against a victim who cannot easily defend himself or herself. It is one of the most common types of bullying done in the 21st century. Due to cyberbullying there has been much report of committing suicide and harming one’s self.

Why regulation of cyberbullying is important?

As cyberbullying has become one of the most dangerous types of bullying around the world it is very important that to regulate it by law. There should be punishments for those who bully and it should be followed by all the countries. This is the only way in which cyberbullyng can be controlled in such a developed technical world.
By regulating cyberbullying will help everyone since almost all the people are at risk of being victim of cyberbullying. Every single day we use internet for our daily wants and needs. Especially young childrens spends half of their day browsing internet are at high risk of being victim of cyberbullying. If regulated these problems will be minimized.