What do satellites do on the orbit and why are they important for people?

What is the satellite?

A satellite is a moon, planet or machine that orbits a planet or star. 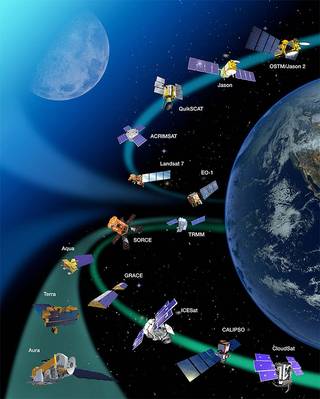 launched into space and moves around Earth or another body in space.


Earth and the moon are examples of natural satellites. Thousands of artificial, or man-made, satellites orbit Earth. Some take pictures of the planet that help meteorologists predict weather and track hurricanes. Some take pictures of other planets, the sun, black holes, dark matter or faraway galaxies. These pictures help scientists better understand the solar system and the universe.

Still, other satellites are used mainly for communications, such as beaming TV signals and phone calls around the world. A group of more than 20 satellites makes up the Global Positioning System, or GPS. If you have a GPS receiver, these satellites can help figure out your exact location


How Do Satellites Orbit Earth?
Most satellites are launched into space on rockets. A satellite orbits Earth when its speed is balanced by the pull of Earth's gravity. Without this balance, the satellite would fly in a straight line off into space or fall back to Earth. Satellites orbit Earth at different heights, different speeds and along different paths.

Why Are Satellites Important?
The bird's-eye view that satellites have allows them to see large areas of Earth at one time. This ability means satellites can collect more data, more quickly, than instruments on the ground.

Satellites also can see into space better than telescopes at Earth's surface. That's because satellites fly above the clouds, dust and molecules in the atmosphere that can block the view from ground level.

Before satellites, TV signals didn't go very far. TV signals only travel in straight lines. So they would quickly trail off into space instead of following Earth's curve. Sometimes mountains or tall buildings would block them. Phone calls to faraway places were also a problem. Setting up telephone wires over long distances or underwater is difficult and costs a lot. With satellites, TV signals and phone calls are sent upward to a satellite. Then, almost instantly, the satellite can send them back down to different locations on Earth.

How Does NASA Use Satellites Today?
NASA satellites help scientists study Earth and space. Satellites looking toward Earth provide information about clouds, oceans, land, and ice. They also measure gases in the atmosphere, such as ozone and carbon dioxide, and the amount of energy that Earth absorbs and emits. And satellites monitor wildfires, volcanoes and their smoke.

All this information helps scientists predict weather and climate. The information also helps public health officials track disease and famine; it helps farmers know what crops to plant, and it helps emergency workers respond to natural disasters.
Share this article :