All water on Earth is used and reused, over and over, in an elegant water cycle.
Water reuse occurs in various ways on a daily basis. It happens when a community’s treated wastewater is discharged into rivers or other water bodies. If you live in a community downstream of another, chances are you are reusing water from an upstream town. Scientifically proven advances in water technology allow communities to capture and reuse water for many different purposes. The level of treatment employed depends on the water’s source, its intended use and how it ultimately gets delivered. 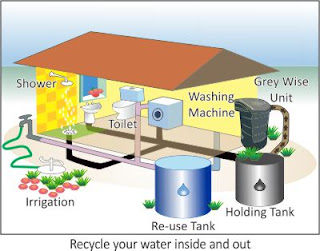 Some communities reuse water to replenish groundwater basins. Others use it to augment surface water reservoirs, often blending it with other water supplies or allowing it to remain in storage for a certain amount of time before withdrawing it and cleaning it again at a drinking water plant. Water also is reused by industries and also to irrigate crops or landscapes.
There is no one-size-fits-all approach to taking previously used water and treating it for another use. There are many different scientifically proven processes and options in use by communities today to diversify their local water supply portfolios and meet needs. Consumers can be assured that water reuse involves extensive cleaning, rigorous monitoring and testing, and is good for the environment and scientifically proven to be safe.
The terms are grouped into categories based on how they are used in public outreach materials and technical reports, and definitions are provided Foundation Terms

·Potable Water is drinking water that meets or exceeds state and federal drinking water standards.
·Recycled Water
Generally refers to treated domestic wastewater that is used more than once before it passes back into the water cycle. The terms “reused” and “recycled” are often used interchangeably depending on where you are geographically.
·Reclaimed Water is previously used water that has been treated for reuse but has not yet been put to another use. Once reclaimed water is put to some purpose it is referred to as recycled or reused water.
Terms to Describe Water Treatment Technology

Advanced Oxidation
is one of the processes that can be used as a safety barrier in the water purification process. Hydrogen peroxide, ultraviolet (UV) light and other processes are used in combination to form a powerful oxidant that provides further disinfection of the water and breaks down the remaining chemicals and microorganisms and provides further disinfection of the water.
Dual Media Filtration is a filtration method that uses two different types of filter media, usually sand and finely granulated anthracite. 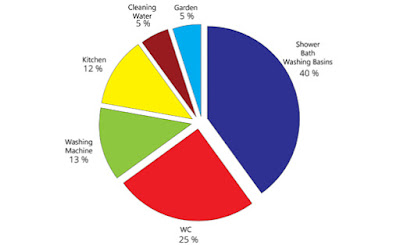 Granular Activated Carbon is a process used to remove chemicals that are dissolved in the used water Orbital Systems recycling shower. ... All told, the OrbSys shower can reduce water consumption by 90% — it sounds like 100% of the water is fully re-used during the shower, but after the shower it is released into your house's sewer pipes.

What is a recirculating shower?

It couldn't just capture and recirculate the water; most countries require shower water to meet potable-water standards. So instead he designed a miniature treatment plant that continuously captures, cleans, and recirculates 70 percent of the water used during a shower