LAS VEGAS - Virtual reality allows the user to enter a different world through sight and sound. Several researchers and companies are adding a third element to the virtual experience: the sense of touch.
Researchers in haptics, meaning the feeling of touch, are incorporating this sense into virtual reality with real-world applications.
French company Go Touch VR created a device called VRtouch that straps onto the fingertips. The device applies varying pressure to the fingertips that correlates to what the user is seeing, touching and lifting in the virtual world.
“That will open enormous possibilities,” said Eric Vezzoli, co-founder of Go Touch VR.

Aglove which allows the wearer to touch objects in virtual reality, so that chess players could actually feel their pieces when playing through a computer, has been invented by scientists.
The silicone rubber gadget, which wraps around the hand, works by using sensors which detect movements in fingers as they reach to grab an object, then feeds back the corresponding sensation.
To replicate the feeling of touch, small pockets of silicon swell with air, and vibrate slightly beneath the fingertips to give the sense that the fingers are actually in contact with something. 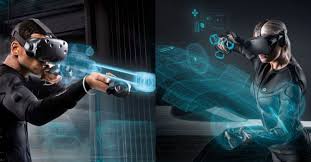