The main principles and purposes of the memetics study 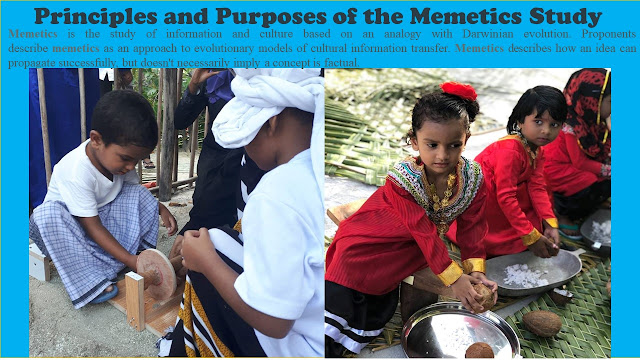 What is a memetic study?
Memetics is the study of information and culture based on an analogy with Darwinian evolution. Proponents describe memetics as an approach to evolutionary models of cultural information transfer. Memetics describes how an idea can propagate successfully, but doesn't necessarily imply a concept is factual. Memetics is the study of how memes spread in social systems and how they impact us as individual agents. Memes are sustainable information units influencing and forming us, impacting the social systems we belong to. Sustainable Memes spread successfully among us and can be regarded both as semiotic signs out there in the world, and objects in our minds. Memes are naturally selected and adapted by human beings based on “competition” within our consciousness. The fittest and best-adapted memes will have a better diffusion than the ones which do not fit into the cultural systems they are competing within.
The main principle and purpose of the memetic study
Memetics. Meme: an information pattern, held in an individual's memory, which is capable of being copied to another individual's memory. Cultural evolution, including the evolution of knowledge, can be modelled through the same basic principles of variation and selection that underly biological evolution. In the literature of Memetics, the term “competition” is not discussed in detail. To say that something like memes could be competing does not necessarily impose consciousness and intent to them. Animals in nature are not conscious of competition either, but as observers, we can apply the term competition to describe their interaction, diffusion of genes and adaptation to the environment within or among individuals, groups and populations.

Memes assign and/or objects in themselves do not have consciousness, intention or capabilities, but from the outside, it makes sense to talk about competition among them. It is possible to talk about the diffusion, selection and adaptation of memes without implying that memes have human capabilities.


The history of Memetics
In the popular-science book, The Selfish Gene, Richard Dawkins said he originated the term meme as a cultural equivalent of the gene. This was done by shortening the term meme which he said he derived from the Greek mimeisthai, to imitate. Ted Cloak had previously outlined a similar hypothesis, which Dawkins mention together with the work of Cavalli-Sforza.

But as pointed out by Laurent the evolutionary biologist Semon Wolfgang wrote already in 1904 “Die Mneme” a book about memory where the meme was defined as “units for cultural transmission of experiences” The French sociologist, criminologist and social psychologist Gabriel Tarde was also focusing on imitation and cultural diffusion in Les Lois delimitation (1890, translated into English in 1903).

Later in 1926, the Belgian Nobel Prize winner Maurice Maeterlinck wrote The Life of the White Ant where he mentioned the mneme again as a memory trace. Maeterlinck was later accused of plagiarism by copying the work of the South African poet and scientist Eugène Marais. The origin of the meme and Memetics is hence as controversial as it is old, going back to the Greek myths where Mneme was one of the three original Muses in Boeotia, a part of ancient Greece. Her sisters were Aoide, the muse of song and Melete, the muse of meditation. Mneme was the muse of memory.

In the early 1980s, Charles Lumsden and Edward E. Wilson published Genes, Mind and Culture introducing the term culture genes as an equivalent to memes. In the same year, Cavalli-Sforza and Feldmann published Cultural Transmission and Evolution. Both books were within most of the social sciences regarded as very controversial. The authors were accused of being orthodox biologists taking camouflage positions for a “nature over culture” perspective. The criticism was influenced by David M. Sahlins earlier book The Use and Abuse of Biology. The term sociobiology became a derogatory term in many social science circles, regarded as having a sole genetic determinism on culture. This alleged genetic determinism undermined both general social scientific perspectives on people and society and political ideology on human spirit, freedom and choice.

Douglas Hofstadter’s Metamagical Themes centred on an “anatomical breakdown” and a conceptual deepening of Memetics into schemes, co-memes, bait and hooks. Richard Dawkins’ Viruses of the Mind focused most on religious beliefs and activities and differentiated “religious memes” against computer viruses and scientific findings. Shortly after Francis Heylighen initiated his work on Memetics producing several articles on the meme theme. He was, partly with K Chielens, developing a theory on different types of meme replication and adaptation and underlining the importance of suitable memetic units for Memetics to be tested empirically.

In Thought Contagion: How Belief Spreads Through Society, Aaron Lynch used everyday life examples to further develop the conceptual basis for memes and Memetics. Daniel Dennett (1993) mentioned memes in his highly cited and now-classic book Consciousness Explained29, where he builds on experimental results from neuroscience and cognitive psychology. He further develops his understanding of memes and Memetics in Darwin’s Dangerous Idea pointing at different challenges in operationalizing the concept.

The online Journal of Memetics: Evolutionary Models of Information Transmission was created in 1997 for scientific papers on memes and Memetics. Initially, several articles were quite optimistic about the future of the new research discipline. Two years after, The Meme Machine by psychologist Susan Blackmore became a popular science book trying to further constitute Memetics as a science by deliberating the empirical and analytic potential of the emerging discipline.


The criticism
Memetics is a way to approach perception, thought, communication and social action. Memetics is derived from natural science and genetics and uses the same research program studying social diffusion and adaptation of sign/objects.
Based on the relationship between ontology, epistemology and methodology, a memetic formal ontological statement and definition of the world could be: Reality is memes. An epistemological question that follows would then be: How does Memetics make sense of memes?

Consequently, the methodological inquiry is: What investigatory techniques and procedures can be applied in Memetics to approach memes? Two positions are most eloquent approaching these questions. On one side, externalists state that memes are observable artefacts and behaviour (signs). Outside the occurrence of the event, the practice of behaviour or life of the artefact, the memes have no existence. Memes are out here in the physical “pool” of the environment.

One the other side, the internalists state that memes are manifested in the cognitive brain (objects). A meme is an information pattern, held in an individual’s memory, capable of being copied to another individual’s memory. The meme is a memory item or portion of an organism’s neurally-stored information. The meme is identified using the abstraction system of the observer, whose instantiation depended critically on causation by prior instantiation of the same memory item in one or more organism’s nervous system.
Based on these different positions and arguments on how to grasp memes, some contributors in the field also put forward that no one actually knows what a meme is. Memetics has, in some academic circles, been regarded as an obscure philosophy and not a renowned science. This might be due to what has been perceived as lack of progression and growth in the field in recent years, philosophically, scientifically and in terms of empirical research. Memetics is regarded as a weak metaphor of the strong scientific discipline genetics; a metaphor that breaks down in its attempt of transitioning from natural science to social science. Attempts to establish Memetics as an overall ontology has been an over-ambitious failure.

The answers to these and other calls differ. Thielen's & Heylighen introduce four ways that memes adapt and four stages for memetic replication. They underline the importance of a suitable memetic unit for Memetics to be tested empirically. Examples of such units can, according to them, be storylines; the different elements of stories can be seen as individual memes or digital virus hoaxes like email messages warning for nonexisting viruses.

The intention behind all these calls and answers is to strengthen Memetics. The suggestions put forward grasp, from different angles, aspects that need to be in place to successfully renovate and revitalize Memetics. Firstly, it is necessary to define a clear, distinctive domain ontology with mutually-exclusive memes in each memetic research project. Secondly, it is crucial to develop a more sustainable memetic epistemology, a scientific attractor around which different memetic research threads can revolve, despite any theoretical and empirical differences.

And thirdly, it is vital to define a clear, memetic, methodological framework with distinct criteria for validity and reliability. The epistemology of Memetics should make sense of the diffusion and adaptation of ontologically predefined memes and their influence on individual and collective states and actions. Each empirical researcher should make ontological predefinitions of memes every time they delve into a new empirical field. In other words, the units of analysis need to be defined. The researcher should obviously define what they are looking for. The epistemology of Memetics should furthermore make sense of the correlation between individual and collective thoughts, communications, decisions and actions. There is also a need for an integrative definition of memes that repeal the front between the externalists and internalists. In addition to being seen as signs and objects, memes can be regarded as forms and cognitive templates that process subjective thoughts, communications, decisions and actions.

It is possible to say that all these suggestions bring Memetics back to methodological reductionism, where it does not belong. I argue that methodological reductionism and epistemological holism can be unified. To be analyzed, both physical and metaphysical units of analysis need to be predefined. Implicit in defining the units of analysis lies reductionism. To find the units’ systemic interaction with its social system is the core of an improved memetic research programme. The axiomatic presupposition that memes influence the complex wholes they become a part of, is a holistic and systemic perspective.