Introduction
Working with others in any environment first outcomes may are the disagreements or arguments or different opinions, these called conflicts. Every Conflicts start within two parties, either individual with individual or individual with group of people or group of people with group of people. In the organization dealing with these conflicts are critical to the management. Therefor managers have an ability to tackle these challengers in effective ways.
Today my topic is to discuss about a findings of Managing conflict in work team in research. To find similar type of research information by exploring internet I got a Journal research article done by Four Researchers from University of South Carolina, University of New Hampshire and University of Connecticut, USA, Mr. Mark A. Maltarich, Michael Kukenberger, Greg Reilly, and John Mathieu on a topic “Conflict in Teams: Modeling Early and Late Conflict States and the Interactive Effects of Conflict Processes”.  Teams, team conflict types and team conflict management approaches are the keywords listed in the research.

In the abstract of this research said this research was conducted in 529 individuals and in 145 teams, also provide a theoretical framework and empirically test a series of hypotheses pertaining to the influence of conflict states, including task and relationship conflict, on performance, as well as the moderating effect of two conflict processes (cooperative and competitive management approaches). Inconsistencies in the literature related to the effect of team conflict, specifically task conflict, within teams.

In the research they used different tables and diagram to details the study.  Using such diagram and table make understand easy. 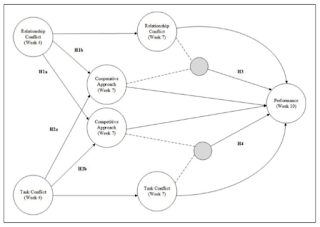 Above diagram show us that the connection of relationship conflicts, task conflicts, corporative approach, competitive approach and performance and clearly explained how whole research was focused and organised.

In the research to test theoretical model, relied on a structural equation model (SEM) based on latent variables at the team level of analysis. This approach allowed to accounts for the consistency in conflict measures over time, as well as the mediating and moderating role of conflict processes. Item scores were standardized before analysis. All tests of statistical significance (p values) are reported for two-tailed tests. The factor structure of measures with a series of confirmatory factor analyses (CFAs). 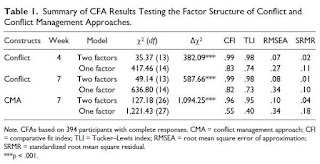 To specifying hypothesized relationships, SEM requires that decisions must be made about how to model correlations among all study variables. 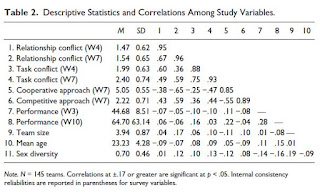 The above table 2 presents descriptive statistics and correlations among the study variables. A limitation of testing hypotheses with latent variable interactions is that it requires the use of a maximum-likelihood estimator with robust standard errors.

These two tables show the summary of CFA results testing the factor structure of conflict and conflict management approaches and descriptive statistics and correlations among study variables. 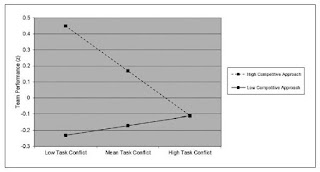 Task conflict and a competitive approach to conflict processes 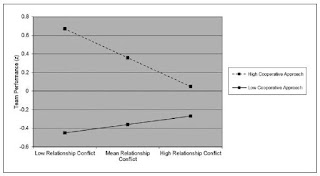 Relationship conflict and a cooperative approach to conflict processes

According to this research team performance can be affected by task conflicts and relationship conflicts. The high level of conflict damages the performance of the team and that relate the organizational outcomes. As a manager it is important to minimize these team conflicts and assure not to go high in these conflicts.