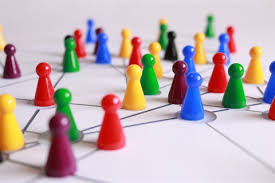 Benefits and Limitations of Inter-organizational network

-         Shared risk: The ability to distribute or share risks fosters creativity and innovation by reducing risk to any one organization.
-         Advocacy: Able to exert more pressure due to greater political clout and community reach resulting from greater numbers and diversity of network members.
-         Efficiency: More efficient use of resources and be able to achieve economies of scale.
-         Innovation: Networks are enabling structures that create opportunities for innovation, which is closely connected to learning.
-          Achieving consensus on the network purpose and goals. Everyone in the organization or the particular group needs to share a clear common goal and be willing to work together towards it.
-          In the work place culture clash occurs when different cultural values and beliefs clash.
-          Loss of autonomy which means hardship which is neither satisfying nor meaningful.

Data collection and Analysis techniques
In the research article provided by the analyses of data was from a national survey conducted by the Center for Technology in Government (CTG) in April 2008. The original data set consists of 173 responses with demographic distribution as shown in Table 1. But after studying the data provided the analysis was shortened to 158-160 respondents and those 7-8% were dropped from the survey because of the high level of missing values. 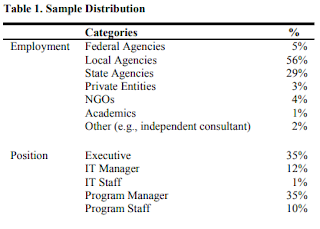 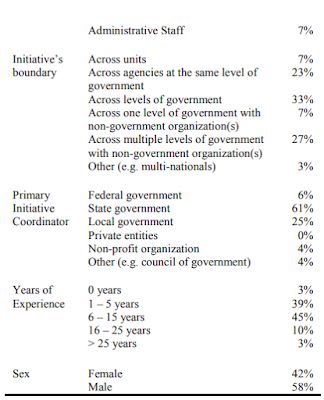 Conclusion
According to the results of the study the significant role of informal leaders show the success of a project that is managed in collaborative ways including inter-organizational networks. Majority of the positive responses indicates the direct influence of the informal leader’s success is very strong. On the other hand negative responses shows the indirect influence. But the decreased number of negative effect of participant misuse of formal authority decreases the likelihood of a project’s failure and increases the likelihood of success.