Impact of Wages on Employee Productivity 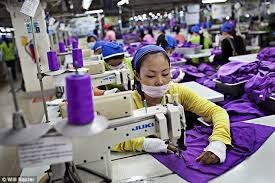 One of the purposes of someone being a labor of a company is to earn an income in the form of wages or compensation. Wages are earned by employee to fulfill basic necessities such as food, clothing and housing. The wages paid by the company must viable to meet the basic necessities of the employees. If the wages increases employees will work more harder to secure the job as his or her basic necessities will be fulfilled. Labor market productivity is thought by economists to be the key determinant of average living standards in the long run. The changes in wages have a great impact on company productivity. So the most of companies make changes to wage polices to achieve the production targets of the company.
ROLE OF WAGE

The results (Table above) indicate wages plays a greater role because mean scores for overall of the total sample (3.042), the highest rated aspect Rewards participate moral of employees and the mean scale was 3.36. Wages is very important for employee productivity because Lack of reward is potential reason of decreasing employee’s productivity and wage is the most influence production, Successful employee gets his/her rights through pay system for their wages.

The results (Table above) indicate that the employee productivity among mineral water industries in Mogadishu is generally high and this is indicated by the total mean of (3.2375), and the highest rated aspect Employee Productivity depends on wage (mean =3.38), Employees productivity plays important role for organizational performance and the fast Factors that increase employees productivity are good capital.

The employee work for an organization to fulfill his or he basic needs. The wages paid must be a real wage to fulfill employees basic needs. If the employee wages increase he will be more motivated work and put more efforts to secure his jobs. Employees work more to promote next level for better pay. The product can be increased with a motivated work. The employees first wants to met his or her basic necessities. The wages and productivity was not increased same time it create the inflation in the economy. And also when the wage rate was increased the more labor will be ready to work in the market this may create unemployed in the economy. But the existing work force will work more harder to secure there job and this leads more productivity in the economy.