Explain the structure of the Maldives judicial system. 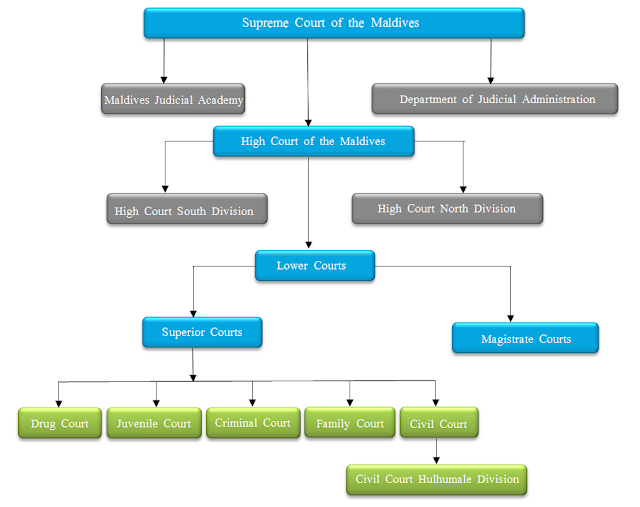 Supreme Court: The Supreme Court is the highest authority for the interpretation, protection, and enforcement of the Constitution, and also plays a critical role in the administration of the court system. It is also the final court that can challenge and potentially overturn the decisions of other courts.

High Court: The High Court functions as an appellate court of the first resort to challenge the decisions of the superior and lower courts. The High Court also has the jurisdiction to enquire into and rule on the constitutional validity of any law or part of a Law.

Superior Courts
Criminal Court: The Criminal Court is mandated with looking into criminal matters
Family Court: The Family court primarily looks into matters relating to disputes arising between families. Matters that may be deliberated upon by the Family Court include inheritance disputes, disputes about parentage, marital issues and divorce, child custody hearings and assignment of child support.
Civil Court: The Civil Court primarily looks into civil disputes except for those kinds of matters that fall under the jurisdiction of the Family Court.
Juvenile Court: The Juvenile Court is a specific court that deliberates on cases involving minors – that is, any individual below the age of eighteen –who have been accused of a crime
Drug Court: The drug court exists specifically to deliberate upon cases whereby an individual has been accused of a drug-related.
Share this article :