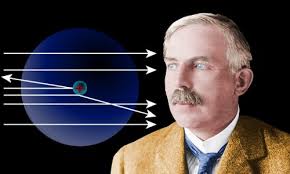 Ernest Rutherford the father of nuclear chemistry and physics was born on August 30, 1871 in the town of Bright water on New Zealand's South Island. He is the one who found and named the atomic nucleus, the proton, the alpha particle, and the beta particle. Also he found the concept of nuclear half-lives and achieved the first deliberate transformation of one element into another, fulfilling one of the ancient passions of the alchemists.


Ernest received his early education in Government schools and at 16 years old entered Nelson Collegiate School. In 1889 he was awarded a University scholarship and he proceeded to the University of New Zealand, Wellington, where he entered Canterbury College. He graduated M.A. in 1893 with a double first in Mathematics and Physical Science and he was awarded an 1851 Exhibition Science Scholarship, enabling him to go to Trinity College, Cambridge, as a research student at the Cavendish Laboratory under J.J. Thomson. In 1897 he was awarded the B.A. Research Degree and the Coutts-Trotter Studentship of Trinity College.

•    Ernest Rutherford is known as the father of nuclear physics. His own researches and work done by his associates and students under his supervision, established the nuclear structure of the atom and the characteristics of radioactive decay as a nuclear process.
•    While at Cambridge, he worked with J. J. Thomson on the conductive effects of X-rays on gases. This led to the discovery of the electron which Thomson presented to the world in 1897.
•    While exploring uranium’s radioactivity, he discovered two distinct types of radiations that differed from X-rays in their penetrating power. He named themAlpha ray and Beta ray in 1899.
•    In 1903, he considered a type of radiation discovered previously by a French chemist, Paul Villard. It had a much greater penetration power and he named it the Gamma ray. All three names of the radiations – Alpha, Beta, and Gamma are still in common use to this day.
•    In 1919, he became the first person to transform one element into another. This was achieved through an experimentation wherein alpha radiation was used to convert nitrogen into oxygen. As a result of the reaction, proton was discovered in 1920.
•    He published several successful books like ‘Radioactivity’ (1904); ‘Radioactive Transformations’ (1906); ‘Radiation from Radioactive Substances’, with James Chadwick and C.D. Ellis (1919, 1930); and ‘The Electrical Structure of Matter’ (1926).

He was invited many new things in physics world. Below here mentioned some achievement of his carrier.

•    Nobel Prize in Chemistry (1908) "for his investigations into the disintegration of the elements, and the chemistry of radioactive substances" - Affiliated with Victoria University, Manchester, United Kingdom
•    Knighted (1914)
•    Ennobled (1931)
•    President of the Institute of Physics (1931)
•     After the war, Rutherford succeeded his mentor J. J. Thomson in the Cavendish Professorship at Cambridge
•    Element 104, rutherfordium, is named in his honor
•    Received several honorary fellowships and degrees
•    Buried in Westminster Abbey


He died after suffering from strangulated hernia on 19 October 1937, at the age of 66. He was interred at Westminster Abbey, near Isaac Newton and Lord Kelvin.