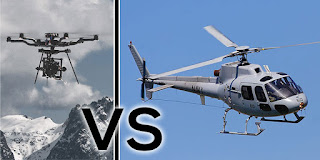 Father range:  As of current, the farthest distance you can fly with a drone is limited. But, anything beyond it and they stops right there. Suppose that you are engaged in a police car chase and drone can’t follow that far due to signal limitations. So, you are pretty much stuck right there. A helicopter can stay up in the air for a long distance as long there is fuel in the tank.

Long flight time: In drones the batteries are with limited capacity. Like I mentioned that the drones don’t have far control range, the drones are also limited by its battery capacity. What does that means for helicopters? They operate on a large capacity of fuels that gives them hours of flight time. They can fly over great distance without the need to land and refill.

Delivers larger payload: Drones can, carry capability payload but helicopters will completely dominate this industry. A helicopter can easily carry a large bucket filled with water and dump it over the wildfire.  Recently an amazon rain forest has seen a high number of fires and they used a multiple of helicopters to control the fire.

Better resistance against winds: Drones get carried away by the heavy wind due to its light weight. But helicopters are well designed and built to withstand heavy winds especially at high altitude and turbulence.

Takes you anywhere you want to go: Helicopter can carry few people where ever they want to go. But drones so far, cant able to carry people and it can reach a limited range of distance.