Discuss the Sources of Law. 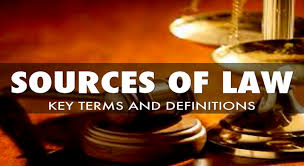 Customs
Customs consists of rules of conduct which are generally observed. The courts of law in administrating justice should accept these rules because what custom is to society is a law to state.
Judicial Precedence
Judicial precedent is the source of law where past decisions create law for judges to refer back to for guidance in future cases. The doctrine of precedent is often referred to as being a rigid doctrine. Within the court hierarchy, every court is bound to previous decisions made by courts higher than them.
Legislation
The federal legislature derives its powers from Article I of the Constitution. The federal legislature is a source of law because it enacts statutes or statutory law. A statute is a law passed by a legislature; and statutory law is the body of law resulting from statutes.