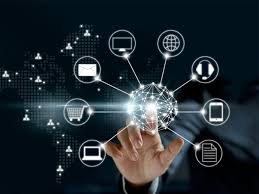 The Information Age (also known as the Computer Age, Digital Age, or New Media Age) is a historic period in the 21st century characterized by the rapid shift from traditional industry that the Industrial Revolution brought through industrialization, to an economy based on information technology. The onset of the Information Age can be associated with the invention of the transistor, particularly the MOSFET (metal-oxide-silicon field-effect transistor), which revolutionized modern technology and became the fundamental building block of digital electronics in the information age.

- Communication Speeds: Internet speeds have increased exponentially since the early days of dial-up. Ever faster broadband enables the transfer of large amounts of information across the web almost instantaneously, making it possible to stream video and audio in real time, send large data files, and access data from virtually anywhere in the world.

- Social Connectivity: Digital technology makes it easy to stay in touch with friends, family, and work remotely, even if you are in another part of the world. You can communicate by words, video, audio, and exchange other media.

- Learning Opportunities: Anybody with access to the internet now has access to a huge proportion of the world's knowledge over the web. Lessons and courses can now be delivered virtually online. Communication advances mean that you can now easily communicate with most of the world's population and learn directly from sources.

- Information Storage: Digital technology enables the storage of massive amounts of information in relatively small spaces. Large amounts of media, such as photos, music, videos, contact information, and other documents can be carried around on small devices like mobile phones.

- Editing: One of the great advantages of digital technology over traditional media is that the information can be easier to edit or manipulate. Word processing has brought about a revolution in the editing of text.