Alternative energy is any energy sources that is an alternative to fossil fuel. fossil fuel is a formed by a natural processes it has a carbon and include petroleum ,coal and natural gas. such as, methane, ethane, butane. 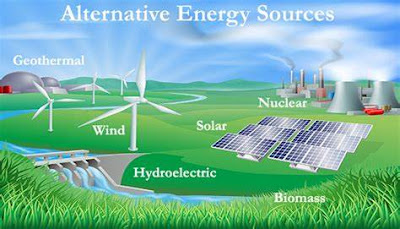 sun can provide a solar energy . because solar power harvests the energy through of the sun. large solar energy panel fields often used desert to give a more power to charge the panel so many homes can used solar panel system to their own resources such as electricity.

Wind power is becoming more and more common. the new innovation that are allowing wind farms to appear are making them a more common sight. wind can through a power to turn turbine can to produce electricity.

Wave energy is produced from a wave to produce a ocean. waves energy is renewable and causes on harm to atmosphere. producing wave energy can dame marine ecosystem. it is highly dependent on wave length and can also be a source of visual and noise pollution.

There are numbers of different alternative energy sources that are more than capable to replace currently dominate fossil fuels.
Share this article :