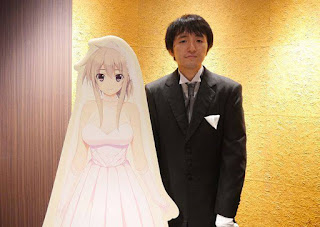 All the animals including humans are made in pairs so that the population will increase and benefit from each other. But in this crazy world people have been marrying different plants, animals and even to virtual characters.

People who marry these virtual characters have come from abusive backgrounds and are most probably suffering from mental illness who have trust issues with real humans.  Even though you can marry to a virtual character it is more like watching cartoons in the 3D world. they do talk with the owner but there has not been any technology which could do more. the characters can not be touched or go out to have dinner with you.

In my view, this kind of people should be given proper treatment so that they can have a better life and understand the difference between real humans and an animated character. we should never forget the reason why we are made in pairs and should never cross the law of nature. if it is continued in this manner and other countries try to adapt this, there might be a day where all the human beings are destroyed and the real world becomes the virtual world.
Share this article :