What Is the Meaning of Variables in Research? 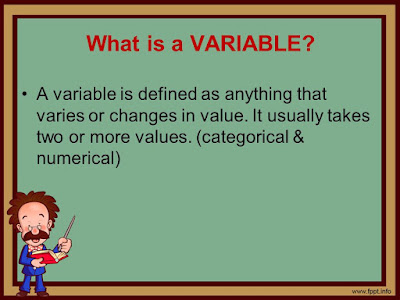 In programming, a variable is a value that can change, depending on conditions or on information passed to the program. Typically, a program consists of instruction s that tell the computer what to do and data that the program uses when it is running. The data consists of constants or fixed values that never change and variable values (which are usually initialized to "0" or some default value because the actual values will be supplied by a program's user). Usually, both constants and variables are defined as certain data type s. Each data type prescribes and limits the form of the data. Examples of data types include an integer expressed as a decimal number, or a string of text characters, usually limited in length.

The term variable is used as a synonym for construct or property being studied. It is a symbol of an event, act, or characteristic, trait or attribute that can be measured and to which we assign categorical values. "A concept that is observable, measurable, and has a dimension that can vary". For example, the temperature is a variable that is observable, measurable, and varies from high to low. A variable is defined as anything that varies or changes in value. Because variable represents a quality that can exhibit differences in value, usually magnitude or strength, it may be said that a variable generally is anything that may assume different numerical or categorical values. Examples of variables.Gender, motivation, marital status, religion, person’s attitude towards women empowerment, family income, intelligence etc.

4 main types of variables
In research or studies that are attempting to study a causal based relationship, four sets of variables may operate:
(a) Change variables that are responsible for bringing about change in a phenomenon;
(b) Variables which affect the link between cause and effect variables;
(c) Outcome variables which result from the effects of a change variable; and
(d) Connecting or linking variables, which in certain situations important to complete the relationship between cause and effect.

EXAMPLE. To find out if your weight depends on the number of calories you consume, you could lower your caloric intake. Here, calories are the manipulated variable for a period of time and see how your weight changes in response. You want to find out what the effect is of changing lesson lengths is on student exam performance. Here, the manipulated variable would be the lesson times, as that’s what you’re going to change to see the effect on exam performance. Controlled variables refer to variables or contributing factors that are fixed or eliminated in order to clearly identify the relationship between an independent variable and a dependent variable. Controlling variables is important because slight variations in the experimental set-up could strongly affect the outcome being measured. The factors or conditions that are kept the same (unchanged) in an experiment. There can be many controlled variables in an experiment. They are also called as the covariate.