The History of Computers

Before 1935, a computer was a person who performed arithmetic calculations. Between 1935 and 1945 the definition referred to a machine, rather than a person. The modern machine definition is based on von Neumann's concepts: a device that accepts input, processes data, stores data, and produces output.
We have gone from the vacuum tube to the transistor, to the microchip. Then the microchip started talking to the modem. Now we exchange text, sound, photos and movies in a digital environment. 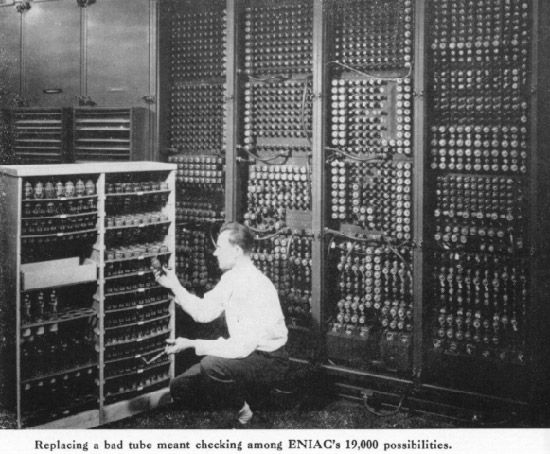 Vacuum Tubes invented in 1947 by Nicolas Babbage. In these computers, vacuum tubes were used as the basic components of CPU and memory. These computers were mainly depended on batch operating system and punch cards. Magnetic tape and paper tape were used as output and input devices in this generation. Computers of the 1940s and 50s had 18,000 tubes in them and housing all these tubes and cooling the rooms from the heat produced by 18,000 tubes was not cheap and not efficient.