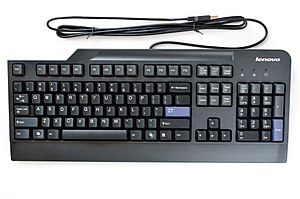 A computer keyboard is one of the primary input devices used with a computer. Similar to an electric typewriter, a keyboard is composed of buttons that create letters, numbers, and symbols, as well as perform other functions. 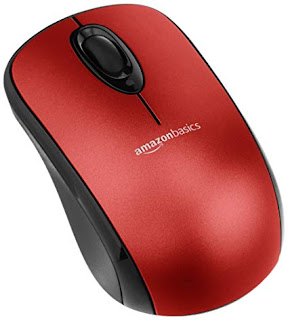 A computer mouse, often simply referred to as a mouse, is a hand-held pointing device that detects two-dimensional motion relative to a surface. This motion is typically translated into the motion of a pointer on a display, which allows a smooth control of the graphical user interface. The first public demonstration of a mouse controlling a computer system was in 1968. Originally wired to a computer, many modern mice are cordless, relying on short-range radio communication with the connected system. Mice originally used a ball rolling on a surface to detect motion, but modern mice often have optical sensors that have no moving parts. In addition to moving a cursor, computer mice have one or more buttons to allow operations such as selection of a menu item on a display. Mice often also feature other elements, such as touch surfaces and "wheels", which enable additional control and dimensional input. 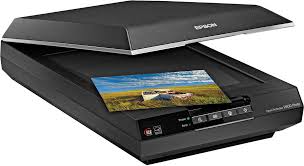 It is a device that optically scans images, printed text, handwriting or an object and converts it to a digital image. Commonly used in offices are variations of the desktop flatbed scanner where the document is placed on a glass window for scanning. Hand-held scanners, where the device is moved by hand, have evolved from text scanning "wands" to 3D scanners used for industrial design, reverse engineering, test and measurement, orthotics, gaming and other applications. Mechanically driven scanners that move the document are typically used for large-format documents, where a flatbed design would be impractical.